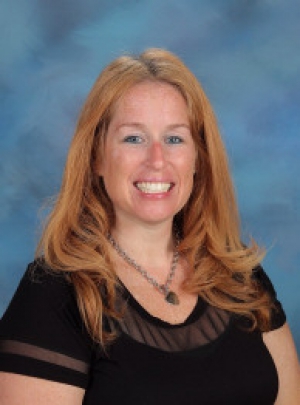 Mrs. Catherine Perry was born and grew up in central New Jersey, just minutes north of Princeton. She is a graduate of Saint Peter's College in Jersey City, New Jersey with a Bachelor of Science in Psychology and Elementary Education. She attended college on a full athletic softball scholarship, which allowed her to travel throughout the United States competing at the Division I level. Later, she completed a Master of Arts in Educational Leadership from Kean University in Union, New Jersey.

Mrs. Perry has taught several grades, at both the elementary and middle school levels, throughout her time in the classroom. When New Town Elementary opened its doors in August 2007, she was a teaching member of the 5th grade team. Later that school year, she joined the school's administration as an Assistant Principal.  Before the start of the 2013-2014 school year, she was named the school’s Principal.

Mrs. Perry also lives in the New Town community with her husband, Michael, and their two young sons, Jayden and Jaxson.

Message from the Principal:

I look forward to working with NTES stakeholders to continue a tradition of excellence in academic and social growth for our students. I continue to be committed to supporting the NTES staff in providing a high quality, standards-based education that is focused on student learning and data driven results.

I encourage you to get involved in our community; everyone has something to contribute. TIME, TALENT, OR TREASURE! Your time is a significant investment in student learning and we appreciate the gift of our strong school-home partnership.