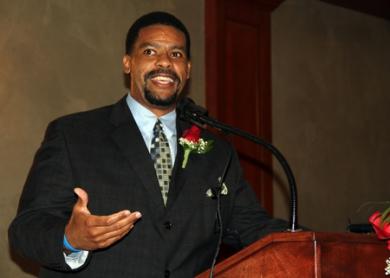 Maxie Johnson, Jr. was a classroom teacher for 14 years. He has worked with kindergarten through college-aged students. Originally from Illinois, Mr. Johnson received his Bachelor’s degree in Psychology and Elementary Education from the University of Illinois. After moving to Arizona, Mr. Johnson taught Jr. High and kindergarten classrooms during an eight-year span.

After earning his Master’s degree in Educational Leadership, Mr. Johnson and his family (Wife Serena, who serves as Director of Disability Services at CPCC, daughter, Rhakya, and son, Maxie III, UCPS students as well) relocated to Indian Trail in 2006.

In 2012, Mr. Johnson was selected as “Union County Public School’s Teacher of the Year”, the first African American to win this award. Mr. Johnson went on to serve as an Assistant Principal at East Union for four years, and is very proud and honored to serve as Principal of Wingate Elementary School. He and his family have thoroughly enjoyed the Wingate Community that has embraced them so well.