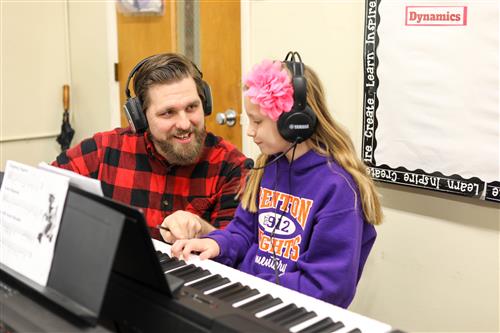 At first glance, the classroom could be mistaken for a university’s piano lab. That is, if it weren’t for nearly a dozen elementary students sitting behind the keyboards, completely immersed in exploring music at their own pace.

Kindergartners giggle as they run their fingers up and down the keyboard. They don’t know how to read sheet music quite yet but the keyboard lab provides them with an opportunity to explore sounds and practice basic hand positioning.

In the back of the classroom, a group of fifth graders are taking their skills a bit further – some are reading sheet music in front of them while others are making up their own songs.

“They love being here because they think it’s so cool,” BHESA music teacher Zachary Jones said watching the students. “They’re fascinated with it.”

The BHESA keyboard lab is the only class of its kind in UCPS. It was originally a dream shared by Jones and BHESA Arts Coordinator Frank Casstevens. Thanks to a $15,000 grant provided by Bennack-Polan Foundation, the keyboard lab became a reality for hundreds of BHESA students this school year.

The students have only been using the keyboard lab for a few months, but it's clear to see that it's already a game-changer for the school.

From his station at the front of the classroom, Jones is able to speak through a microphone headset into each student’s headphones. He has the ability to select when they can and can’t play the keyboards during a lesson – a feature that he adds is extremely helpful for classroom management – and he’s also able to broadcast one or several pianos to the other students in the classroom. 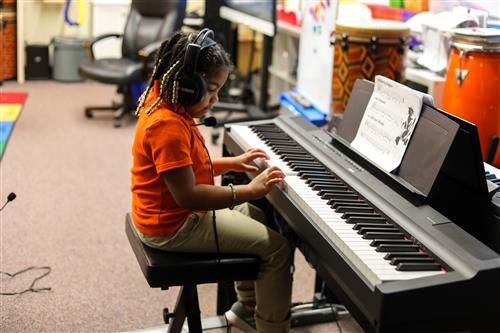 But where the keyboard lab really shines is in its ability to be a cross-curriculum tool that not only expands their music literacy but covers multiple subject areas as well.

For example, Jones said, second graders are working on fairy tales in their language arts classes. During his music lessons, he’s able to extend those lessons by having students talk about the characters in the story and record their own compositions to accompany the story.

Science is incorporated during classes when they explore how sounds are created and mathematical concepts are being practiced as the students learn to read music.

As an added bonus, every keyboard can connect to the students’ Chromebooks to accompany lessons they’re learning in class.

“Everyone always talks about STEM, STEM, STEM, but it really all goes hand in hand because you can’t have one without the other," Jones said. "It’s a way of thinking critically and creatively. You can’t have the arts without science, math and technology because we use those tools to create.”

Sitting in the keyboard lab, BHESA fifth grader Katlyn Perez-Rangel said she could barely contain her excitement when the first keyboards were unveiled at her school. She’d always been interested in learning to play the piano and was thrilled to have the opportunity to learn for a year.

“When I play the piano, I feel like I go somewhere else. It’s not just music to me -- it makes me feel so positive,” she said. “Everybody has a different dream and everybody has something different they want to do in life, and that’s why I’m happy that we get to try something new with this class because I found my dream.”

At the end of the day, Jones said he hopes to instill in the young students an even greater appreciation for the arts.

“I hope they leave with the passion to want to learn more. Maybe they’ll want to pursue this as a hobby or pursue this professionally,” he said. “My hope is that even if they don’t pursue it professionally that they’ll have gained a life-long skill that they can carry later into life.”

Want to learn more about the BHESA keyboard lab? Check out the video below to see the keyboard class in action: