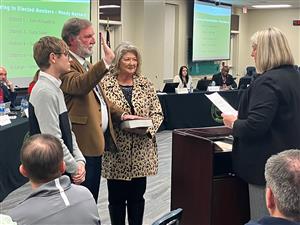 Union County Board of Education member Gary Sides was recently selected by the North Carolina School Boards Association (NCSBA) to serve a two-year term on the association’s Legislative Committee.

Although a survey drafted by the committee will ultimately drive the legislative agenda, Sides said he is personally interested in addressing teacher pay and simplifying the existing pupil funding formula.

Sides also said he is excited to represent the Union County Board of Education as well as board members, staff and educators from all of the counties included in NCSBA’s southwest region. This region includes Anson, Cabarrus, Charlotte-Mecklenburg, Cleveland, Gaston, Iredell-Statesville, Kannapolis, Lincoln, Mooresville, Rowan-Salisbury, Stanly and Union counties.

“I’m looking forward to being able to bring the concerns of school boards, staff and employees in our area into a concrete action plan that we can bring to our elected officials,” Sides said.