Alexia Vega-Franceschi, a fifth grader at Sandy Ridge Elementary is the Union County Public Schools Spelling Bee champion for the third time in a row. Due to COVID-19 safety protocols, this year’s competition 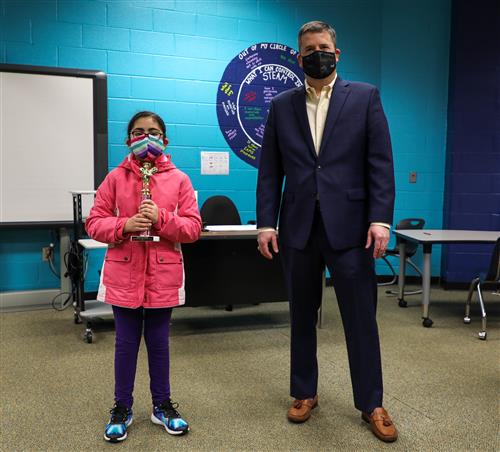 “We’re very proud of her,” said Tracey Kerstetter, Principal at Sandy Ridge Elementary. “I can’t wait to see her move forward, she’s got the talent.”

Participating in the annual Spelling Bee competition runs in the Vega family, Alexia’s older sister Eva was a previous spelling bee champion for the district.

“Not many people can say that they are a three-time champion. She’s an amazing student. We’re all very proud of her and her efforts and we want her to go all the way to D.C., to the national bee,” said UCPS Superintendent Dr. Andrew Houlihan.

Alexia made it through 10 competitive rounds with “Asyndeton” as her winning word. The definition of Asyndeton is: omission of the conjunctions that ordinarily join coordinate words or clauses, ex.: (as in "I came, I saw, I conquered").

When asked what her favorite word is she quickly responded “probably potato,” Alexia is a fan of the vegetable and enjoys French fries and tater tots.

Alexia is showing no signs of slowing down, as she plans to compete again next year. She will represent UCPS at the Regional Spelling Bee at the end of March.

Click here to listen to Alexia in her own words on what it feels like to be a three-time champion and why she loves to spell.

Please see the chart below for a list of students who participated in the UCPS Spelling Bee: