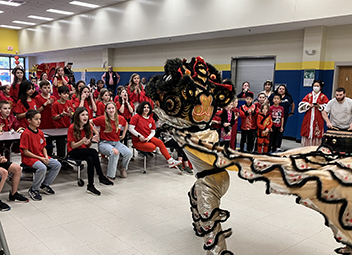 The Chinese New Year celebration at Kensington Elementary Friday, Jan. 20, was a joyous occasion, with students, staff and parents bursting into cheers and smiles as a lion dance troupe performed. Students lined the hallway holding colorful dragons, red paper lanterns and other relevant artwork. The celebration was a chance for the school to show its appreciation for Chinese traditions and culture.

Kensington is one of the schools that offers a Mandarin dual immersion program. Students in the program learn the language and culture. They also share that knowledge with the entire student body when possible.

"We also have a Spanish immersion program here. The programs offer the natural benefit of helping students become bilingual. Aside from English, Mandarin and Spanish are two of the most spoken languages in the world," said Principal Terry Vaughn. "The piece that sometimes gets overlooked is that students are also getting an understanding that other parts of the world operate and think differently."

Parent TaShina Stroud has a third and fifth grader enrolled in the program. She enjoyed the event as much as her children did.

"I wanted them to learn Mandarin because, in my opinion, it's a good business move. The technical world is trending in that direction, and both my children are interested in STEAM (Science, Technology, Engineering, Arts, and Mathematics). I felt like this would be an extra layer to help them when they go into their careers."

Wynnter Knowles, a parent of a fifth grader in the program, chose Mandarin for her son because his grandfather speaks it and his grandmother is from Taiwan. She said he enjoys it.

"Today's celebration was a lot of fun and I had a great time," said Owen Knowles. "I find it hard to learn the language sometimes but the teachers make it fun."

Watch the video of some of the performance below.